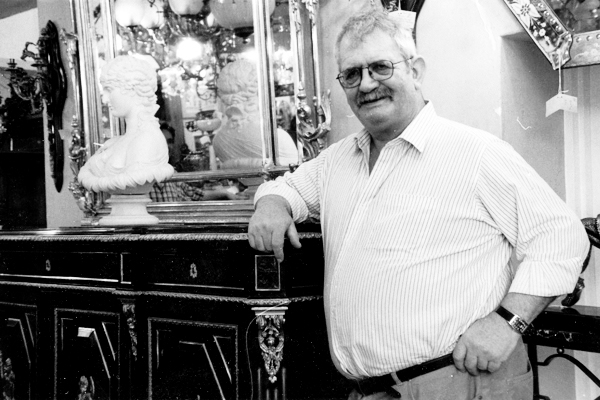 From the late 1970’s a rite of passage to become recognised as a serious antique dealer in Australia, was to make an overseas buying trip, most commonly to England or France, purchasing and shipping back containers of antiques for sale.

Gary Kay fulfilled these criteria in spades, making over 90 buying trips. Probably because of his European heritage, he made France his preferred destination, and combed Paris, its suburbs and the French countryside for treasures. A master of the deal, Gary scooped up fine French furniture, mirrors and chandeliers, and anything quirky and unusual, some of them minor treasures He changed the décor of many households across Australia for the brighter and better.

Being a gregarious person, he would often be accompanied on his buying trips by a travelling companion such as Melbourne dealers Ed Clark or Mike Gleeson. Adding to the sociability of the occasion, while in Paris he would often arrange to meet other dealers for a celebratory dinner.

On one visit to snow covered Paris he slipped over on his stomach. Asked if he were all right he replied  “Of course, I have  my own airbag”, a Gary one-liner, referring to his large paunch resulting from his enjoyment of fine food.

On his early trips in France Gary was the designated driver. He was easily distracted as he liked to peer over the hedgerows and into the shop windows in the towns he was passing through, so his travelling companions decided that the trips would be less stressful if they took over the driving. As well, he suffered from sleep apnea and often he would appear to be snoozing, but would wake at the merest sight of an old chateau or a tiny antique shop in a French village.

He also scoured the antiques auctions whilst in France. In the French saleroom his chest would rise with pride when the auctioneer loudly knocked a lot down to “the international purchaser”.

As the Sydney-based saleroom correspondent for the Australian Financial Review for nearly four decades I went to Melbourne half a dozen times a year for major art and antique auctions. I would never fail to drop into his showroom, Antique Décor, in the row of antique business in the Armadale High Street near the railway station hoping he was not away a buying trip.

Visitors to his High Street store, will recall him in main room of the showroom having conversations with 2 or 3 people at the one time. They could include a fellow dealer, a carrier receiving delivery instructions, a customer being told in which room in their house a sideboard would look best, and one or more of his “boys”, ladder in place struggling to hang another chandelier.

For fellow-dealers, Gary would most likely (in the 1980s) be proudly displaying the Polaroid snaps from his latest buying trip, proclaiming what a good buy each had been. His currency was “G’s”. A “G” was a thousand.  He would proudly proclaim the table in this photo only cost 1½ Gs or he should get 5Gs for that lamp.

With customers, he was the master of the deal. When negotiating he would sometimes fiddle with his watch as if he were using it as a calculator and say, “I don’t think that’s right”. It was not a calculator, but a deal would be stuck amiably.

He was able to recall his stock and restoration costs, as well as historical auction prices and customer details, hopefully correctly, as he never called his staff to check a fact or figure.

He was a delight to chat with, and those who knew him would be waiting in anticipation for his one liners. It was as much to lighten the visit, as to look at his latest finds.

When not in the showroom he would be on the road, visiting other dealers, and never missing inspecting a forthcoming auction in the Melbourne area, and even in Sydney if he was visiting for a fair.

Gary’s enthusiasm could be hard to suppress. Sometimes over-spending brought on by a temperament bordering on bi-polar landed him deep in the red.

Gary’s origins were Polish like two other characters of the trade, Dana Rogowski and Joseph Brown. He was, however, born in Carlton in June 1941, the first son and second child of Abe and Dora Kochn. Abe and Dora had come to Australia before the turmoil that enveloped Europe in the late 1930s. Gary’s brother Joe recalled that the family name was changed to Kay, because “ch” in Kochn was too difficult for Abe’s Aussie friends to pronounce.

Gary’s dealing career began with him visiting scrap yards and op shops and buying and restoring brass beds from auctions. He traded from the back of an old station wagon. He graduated to premises in Chapel Street South Yarra, Toorak Road, South Yarra, Commercial Road Malvern, the Prahran end of High Street and eventually to his landmark showroom at 899 High Street, Armadale in the early 1980s.

This was the time that the Armadale section of High Street was in the later stages a transformation from a street of auto-electricians, panel beaters, vehicle repairers and other utilitarian trades to the more glamourous façade that it has today. The premises that Gary purchased were previously occupied by the automotive parts supplier, Repco. At this time large floor areas, a necessity for antique dealers could be had for reasonable prices. At the peak of the popularity of antiques in the late 1980s there were over 100 dealers operating in High Street and Malvern Road.

After renovations, the showroom consisted of three ground floor showrooms, a large workshop area to the rear, always full of newly arrived furniture, the ceiling a canopy of hanging lamps awaiting restoration.

On the first floor there were offices surplus to his needs which were occupied by various tenants over the years.

During the early 2000s Gary rented some first-floor offices to the Australian Antique & Art Dealers Association of which he was a member and a very strong supporter. The Executive Secretary of the AAADA, Keren Lewis, saw him almost daily during that period and Keren recalls that each morning he would come upstairs and serenade her.

Gary however, had many calls on his health. He sold his showroom and officially retired from business in 2012, but he never ceased chasing the next deal. His routine of calling in on dealers and viewing auctions continued unbroken, on a daily basis.

In the later months of his life he required time-consuming thrice-weekly dialysis.  Dealing, which was his life and obsession had kept him going, drawing him back from the edge time after time.

Gary passed away on November 29 at the age of 77, and a burial service was held for him at the Melbourne Chevra Kadisha in Lyndhurst on December 4. The very large attendance was a testament to the esteem in which he was held, both in the antique trade and the general community.

Gary’s brother Joe began his eulogy by surmising that the movie moguls must be meeting to decide who would play Gary’s part in a biopic – Gerard Depardieu or Jean-Paul Belmondo or even Zero Mostel in a Max Bialystok mode extracting, money from little old ladies in the most charming way.

Gary leaves his wife Maurita, two sons, Maurice and Martin, a daughter in law, Heesun, and a granddaughter, Soleil.

Our thanks to Joe Kay for the Kay family biographical information.