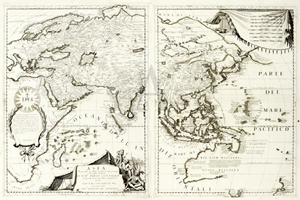 Mapmaker: Vincenzo Coronelli (1650-1718) Size: 615mm x 460mm, Copper engraving on two sheets. Condition: Good, centre fold as issued. Impressive two-sheet map of Asia by Vincenzo Coronelli which was very advanced for its day, using geographical information sourced from the Jesuits who had an extensive network of missions in Asia. A panel on the left of the map includes a note acknowledging the geographical activities of the Jesuits and the title cartouche includes a dedication to Thyrsus González de Santalla, the thirteenth Superior-General of the Society of Jesus. Coronelli himself was a Franciscan priest and widely recognised as one of the greatest cartographers and globemakers of the seventeenth century, famous for having constructed a pair of the world’s largest globes for King Louis XIV. Measuring over 4.5 metres in diameter and weighing approximately two tonnes, the globes were large enough to hold up to thirty people inside. Text on the map notes several points of interest including ‘Tera di Con