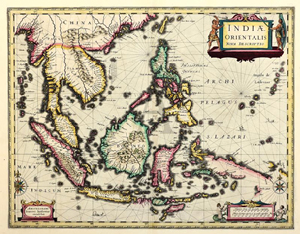 Mapmaker: Jan Jansson (1588-1664) Size: 390mm x 505mm, Copper engraving, coloured. Condition: good, centre fold as issued. Dutch map of the East Indies decorated with an ornate title cartouche flanked by two armed native figures, rhumb lines, compass roses, an ornamental scale of distances with two mermaids and a decorative panel at lower left with Jansson’s name. When first issued in 1630, this was the earliest printed map to record a number of the discoveries made by Willem Jansz in the Duyfken, who made landfall on Cape York Peninsula in 1606, becoming the first known European to reach the Australian coast. In 1605, Jan Willemsz Verschoor, in charge of the Dutch trade in Bantam, on the west coast of Java, sponsored a scheme ‘to discover the great land Nova Guinea and other unknown east and south lands’. Verschoor and his Council chose Willem Jansz as captain and Jan Lodewycks van Roosengin as supercargo. The departure of the Duyfken from Bantam was witnessed by the agent for the British East In