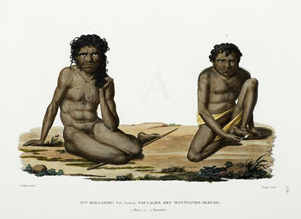 Artist: J. Alphonse Pellion (1796–1868). Copper engraving, hand coloured, 235mm x 315mm. In good condition. From the very rare French voyage account, "Voyage autour du monde" under the command of Louis de Freycinet. Who was also on the Baudin voayge. Artist and naval draughtsman, was a midshipman aboard l'Uranie under the command of Louis de Freycinet expedition in 1817. Pellion assisted the official artists J. Arago and A. Taunay during the three-year voyage around the world. On 12 September 1818, l'Uranie reached Shark Bay, WA, where a camp was established. Pellion's Baie des Chiens Marins, Camp de L'Uranie is in the NLA. The expedition struck camp and sailed for Timor a fortnight later. It then sailed into Port Jackson on 18 November 1819 where they were made welcome by Governor Macquarie, who entertained them at both Sydney and Parramatta and permitted both artists and scientists to wander freely. William Lawson guided the surgeon-zoologist Quoy and the botanist Gaudic