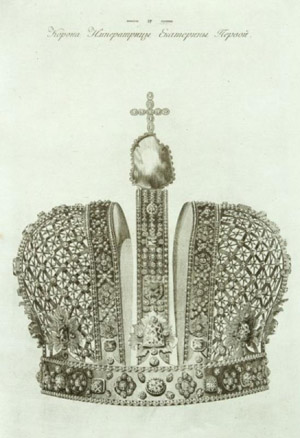 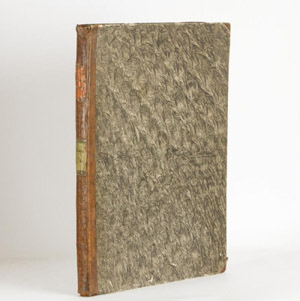 ... muzeia, pod nazvaniem Masterskoi i Oruzheinoi palaty, MALINOVSKII, Aleksei Fedorovich, 1762-1840; VALUEV, Petr Stepanovich (editor) # 11131 v Moskve obrietaiushchagosia. Chast' pervaya. [=Historical account of the Old Russian Museum, known as the Masterskaia Workshop and Armoury Palaces, in Moscow. Part one.] [Moskva]: Gosudarstvennaia Oruzheinaia palata [The State Armoury of the Kremlin], 1807. Elephant folio, 485 x 335 x 30 mm, original quarter leather over continental European papered boards (very good, with minor chipping to extremities), spine with the original two manuscript paper labels in Russian, front pastedown with early manuscript collection number 4242, contents printed on Russian-made watermarked paper, half-title with tipped-in slightly later manuscript sheet in German which provides a translation of the title and gives brief individual descriptions of the engravings, heraldic title-page with slightly later manuscript in German König[liches]. Museum, No. 4242 (now known as the Altes Museum, Berlin, a museum for high art completed in 1830 and known as the Königliches Museum until 1845), pp 139, illustrated with 30 full-­page steel engraved plates, the final leaf with a second heraldic engraving (margins of this leaf with vertical creasing flaws); verso of final leaf with nineteenth century collection stamp with monogram TML within a laurel wreath; three non-consecutive leaves with mild marginal water stains (i.e. the stains were made before collation), otherwise internally bright and crisp; complete; text in Russian in Cyrillic; housed in a custom clamshell box, 520 x 364 x 60 mm, in the style of the period, in blue leather with the Russian coat of arms tooled in gilt to front, patterned paper sides and white satin lining. This monumental and exceptionally rare work, showcasing the ancient gems, crowns, orbs, sceptres, swords, furs, thrones, and other imperial regalia of the Russian rulers from the fourteenth century onwards, represents the first such catalogue of the Kremlin Armoury, a museum which had been completed in the previous year under Czar Alexander I and which is still the permanent home of these royal treasures. (The collection had originally been established by Czar Peter I in 1719). Although the title states "Part one", no second volume was issued. The inventory comprises a series of short essays that provide a historical context for each object, all of which are accompanied by a magnificent engraved plate. Among the treasures described and illustrated are Monomakh's Cap (Shapka Zolotaya), a fourteenth century gold filigree skullcap inlaid with precious stones and trimmed with sable; the Great Imperial Crown of Russia, adorned with almost 5000 diamonds and worn at coronations by Russian monarchs from Catherine the Great to Nicholas II; the crown, orb and sceptre of Czar Michael Fyodorovich, the first Czar of the Romanov Dynasty, created by Telepnev in 1627; and the sixteenth century Crown of Kazan, the second oldest in Russia, which belonged to Ediger Mahmet, the last ruler of the Tatar state of Kazan. The nucleus of this collection today forms part of the Russian Diamond Fund. Aleksei Fedorovich Malinovskii (1762­-1840), the primary author of this work, is principally known for his literary writings and translations. The royal collection to which the present work is dedicated survived the Fire of Moscow in 1812, which destroyed most of the city following the entry of Napoleon's troops after the Battle of Borodino. This lavishly produced plate book is likewise a rare survivor: only six copies are located on OCLC (all in North American collections).