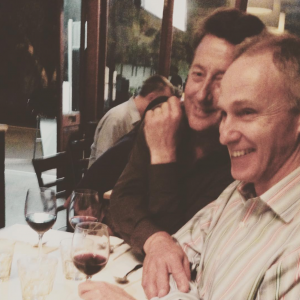 Martyn Cook and Hartley Cook at the AAADA Christmas gathering in Sydney in 2012 “Cooking up a deal”.

I first met Martyn when he was a young, fresh faced lad working for Paul Kenny in Paddington. He was wearing a rather jaunty bow tie. A better apprenticeship in antiques would be impossible to find. Paul was extremely knowledgeable, but modest and a constant source of information freely given. Even today I get on my hands and knees to “dress the castors”, being one of his many requirements. Paul praised Martyn for his willingness to take on any task, including the vacuuming.

It wasn’t long before he headed out on his own to Victoria Street, Darlinghurst near St Vincent’s Hospital. Although his look was not yet fully formed, it was nevertheless a gutsy move. On the surface, it was not an obvious location. However, there was a simplicity and charm to the shop, while he was developing his considerable talents.

From there he moved to the former laundry on Jersey Road, Woollahra, from where two icons of the trade had previously dealt- Christopher Davis and Susie Arnott- Smith.

Then inevitably, Queen Street, Woollahra, together with Thomas Hamel, where he created the most glamorous and elegant premises the Australian antique industry has seen. My father happened to be talking to Martyn’s stationery printer who confided: “He knows what he wants and is very fussy.” It was here that Martyn hosted incredible showings from the likes of Malletts of London. He embraced the top end of the market, travelling widely sourcing the best for his clients, one of whom was David Roche from Adelaide.

He and Thomas took on the grand former light bulb factory in Redfern. In both locations he was in full flight. Incredible stock and beautiful settings. It was about the Sizzle as much as the Sausage. Finally, he came full circle and returned to Darlinghurst for a short while.

Showing impeccable timing, Martyn took on the curatorship of the David Roche Foundation in Adelaide. A happy merging of David’s wealth and desire to leave a lasting legacy and Martyn’s talent for presenting and promoting in an exceptionally stylish and occasionally flamboyant manner. The Foundation is an extraordinary tribute to them both.

His humour was quick, sometimes cutting and frequently raunchy. He was never dull. We were once having a chat at an antiques fair where we were both exhibiting. He had a pair of hall chairs he attributed to William Vile, the noted mid 18th century cabinet maker. One of our fellow exhibitors questioned Martyn’s attribution. He was not amused.

“What would HE know about Vile furniture?! Wait a minute. That’s all he sells!”

Martyn was superbly dressed, physically striking and larger than life. He was a “go to guy” for journalists because he always provided good and entertaining copy. He accounted for a considerable share of total press coverage of our industry. More importantly, he managed to exercise some control over journalists who were sometimes wanting to present the glass as half empty. Martyn usually managed to flip pessimism into a glass half full.

He was a generous supporter of the AAADA, frequently participating in its Seminar program. Needless to say his performances were well attended, both for his presentation and his generous supply of decent champagne. He kindly hosted at Redfern the 50th anniversary dinner for the NSW Association, (now the NSW Chapter of the AAADA). It was a memorable evening.

He wasn’t without his faults, or detractors. Who is? However he was a “great ornament”, (another Paul Kenny line), to the antiques industry, both here and overseas.

His flame burnt brightly for a long time, but it was extinguished way too soon.