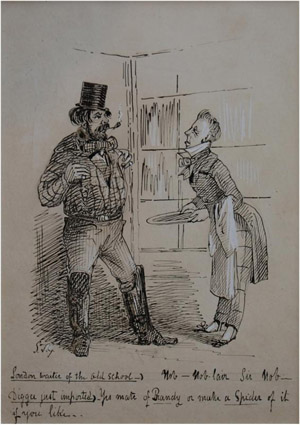 Samuel Thomas Gill Ink and gouache 18 cm x 13 cm A great original cartoon depicting an encounter with the new and old establishment. The Australian gold rush brought a huge amount of wealth to Melbourne and Sydney. The average digger on a good day could easily afford the luxury's of the upper class. The use of the english language between the two classes was an issue that Gill wanted to exploit in the name of comedy. The caption reads: London Waiter of the Old School "Nob- Nob Lain Sir Nob" (Nob was the term used for the gentry or wealthy patrons) Digger just imported "Yes mate, of Brandy or make a Spider of it if you like" (misinterpreted the greeting as a offer of a drink!)