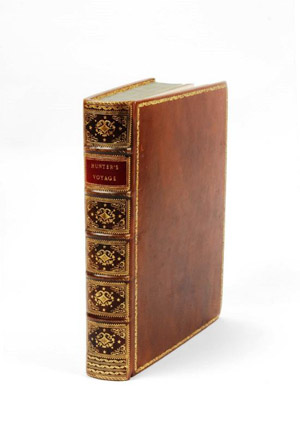 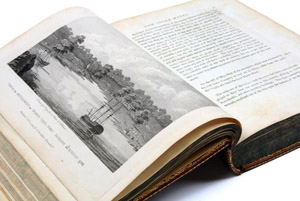 An Historical Journal of the Transactions at Port Jackson and Norfolk Island, with the Discoveries which have been made in New South Wales and in the Southern Ocean, since the publication of Phillip’s Voyage, compiled from the Official Papers; Including the Journals of Governors Phillip and King, and of Lieut. Ball; and the Voyages from the First Sailing of the Sirius in 1787, to the Return of that Ship’s Company to England in 1792. Quarto, with 17 engraved plates, folding maps and charts, list of subscribers; the lower margin of the title cut close with loss of date, as is often the case; an excellent copy bound in period-style calf, spine gilt in compartments between raised bands. London, John Stockdale,, 1793. First edition of John Hunter’s Journal: a foundation book of Australian coastal exploration which, together with Phillip’s account, gives the first charting of Sydney Harbour.