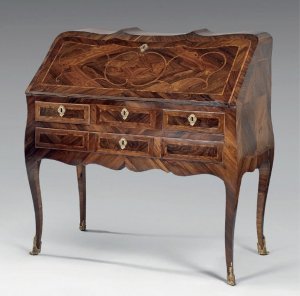 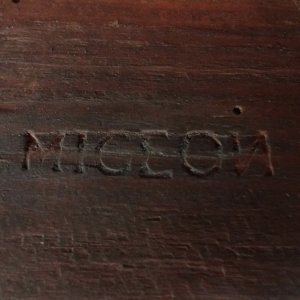 AN 18th CENTURY  LOUIS XV PERIOD, KINGWOOD AND BOIS SATINE, SERPENTINE SHAPED, BUREAU DE PENTE. BY PIERRE MIGEON.  CIRCA 1740The scallop shaped top, above a shaped, fall-front slope, opening to a tooled leather writing surface, with six shaped small drawers, shelves and concealed  coffre fort.  Decorated in Kingwood and bois satine cross-band, papillon ( butterfly wing ) marquetry, with thin ribbon entwined borders, within a bombé shaped case, on cabriolet legs.  With  gilt bronze pierced, rocaille foliate-cast sabots and key escutcheon plates.Stampped Pierre MIGEON.Pierre MIGEON: Maître ebeniste 1720.H. 100 cm, L. 97 cm, D. 51 cm Estampille de MIGEON (Pierre MIGEON), vers 1720 MaîtreMIGEON Dynasty:  A Parisian Family of ébénistes, which the father, son and grandson carried the same first name, Pierre. At once cabinet makers and dealers they worked under the Louis XV reign. The first, Pierre I didn’t sign his works, the custom of the stamp having been returned compulsory from 1743. The second and the most considered, Pierre II, produced a lot of furniture and makes worked his colleagues. Pierre III was dedicated to the furniture business. Migeon's workshop knew a big prosperity with his high quality of works.
Two stamps are known "MIGEON", only letters size differ.
Pierre IV Migeon (II)Pierre IV Migeon (1696-1758) - cabinetmaker - master's degree 1725: The most famous of his lineage, Pierre Migeon IV, as well as merchant ébéniste, furniture stands out, with a the taste blend of tradition and modern.
Coming from a family of craftsmen ébénistes, named Pierre, Pierre IV Migeon is the son of Peter III and Judith Migeon ( Mesureur ). Fourth of a heritage line, he took over from the workshop of his father or of his stepfather, his works are documented in the first half of the eighteenth century with the use of the MIGEON stamp. If his mastery date is in the first half of the 18th century and his reputation, it is known by many designer furniture pieces  made from his workshop at Rue  Charenton. These pieces were manufactured and delivered to a wealthy aristocratic clientele among which there are the Duke of Orleans, the Duchess of Rohan, Duchess of Epernon, Marshal de Noailles, but also several bishops and ambassadors. By the 1740s, the book works for the Crown Furniture Repository and Menus Plaisirs. He enjoys the protection of the Marquise de Pompadour.  He also has many clients throughout France and Europe.  MIGEON also collaborated with many other ebenistes - among the most famous of his time - as Bircklé, Canabas, Criaerd, Jacques Dubois, Lacroix, Saunier or Topino.
Pierre IV Migeon (1701-1758) : belonging to a Paris ébéniste’ family, Pierre Migeon creates sober pieces of furniture with rosewood, violet or satin-like veneering which are very often monochrome. He was one master in “”ailes de papillon”” veneering. Migeon provided the furniture depository of the Crown and the Marquise de Pompadour.Pierre IV Migeon’s stamp :

Pierre I MIGEON (1670-1740)
He possesses an active workshop at Rue Charenton and an important store. His furniture is delivered to a rich clientele, including  the Duke of Orléans, the Rohan duchess, the Duke of Noailles.

Pierre II MIGEON (1701-1758)
At the end of 1730s he takes back the workshop and the store of his father. Very fast, he acquires a great reputation. From 1740, he receives orders to "Garde-Meuble" of the Crown. He benefits from the Pompadour marchioness protection. As his father, he counts among his customers quantity of big amateurs. His co-workers were Bircklés, Canabas, Criaerd, Dubois, Durand, Saunier, Topino. Their stamp sometimes countered next to that of Migeon. The stamp " MIGEON " constitutes a seal of quality. He likes the massive, quiet, rounded, plated forms.

The Book Journal kept by Migeon, covering the years 1730 to 1736, is a unique manuscript source on the production of a workshop and woodworking trade eighteenth century. This proves a particularly successful workshop since Pierre IV Migeon book, by year, for amounts from 23 000 to 37 000 pounds of books. Pierre IV presents itself as both a traditionalist with the use of old forms an impression of strength and balance returned to the Regency and a precursor with inlaid designs or innovative tackles.
In general, the furniture is characterized by a line of sobriety and décor, understated elegance, measured, marked by a set of monochrome sets, with close tones of wood species such as wood violets and satin. In terms of structure, Migeon favours furniture with marked lines - massive and quiet - with a very masculine cut, the often curved base and face crossbow. He does not neglect the most feminine lines. In terms of decor and decorative games, it looks like the cabinetmaker veneer and to a lesser degree of marquetry. wood lovers, it is one of the first to use mahogany. One of the most characteristic of his manner is said plating butterfly wing patterns, obtained by the oblique cutting wood. The cabinetmaker inserts recurrently in a lobed reserves, itself considered one of his trademarks. Many of his furniture, Louis XV commode in the corner, furniture-between the slope and assume this office decor. Although they are less typical, Pierre Migeon also produces diamonds inlays, cubes or flowers of very good quality. Its inlays of flowers - he probably realizes the last third of his career to meet the expectations of its customers - come mostly wood color on satin background or rosewood. The cabinetmaker's frame and compartmentalize them with games sinuous foliage as well as careful. Migeon favors the presence of birds that regularly in his compositions. These floral inlays are particularly visible on several slope offices, reading lights tables, corners and secretaries. How Migeon stands out, although to a lesser extent, by in high quality lacquer decoration.
Regarding bronzes, they are virtually absent in a cabinet maker. Busiest appear on dressers with three rows of drawers Regency. The workshop Migeon finally made furniture of small dimensions and lighter shapes - including a model of secretary of violin-shaped, reading lamps tables or slope offices in the rococo style. The cabinetmaker also runs several small mechanical furniture, commodes and small vanities in which it specializes to provide the royal residences.
After his death, his son, Pierre Migeon V retains its factory and trading, always rue de Charenton, but promotes trade of furniture to the detriment of the cabinet.
MUSEUMS
bed table - Petit Palais - ParisTable sextet - FontainebleauCarnavalet MuseumWriting table in transformation - Chateau de VersaillesDressing - Victoria and Albert MuseumDresser with two drawers levels without crosses, curved on three sides and resting on curved legs. She presents on three sides, a marquetry (natural and stained sycamore) to branches decor, flowers and birds surrounded by exotic wood (rosewood?) In exotic wood frames. The gilt bronze decoration has fixed hands, keyhole, tail pieces, falls and hooves. The marble top is molded. - No. MAD1470 - Museum of Decorative Arts - LyonBIBLIOGRAPHY
Pierre IV Migeon, 1696-1758 at the heart of a dynasty of Parisian cabinetmakers - Sophie Mouquin - Perrin & son 2001The French furniture of the eighteenth century - Pierre Kjellberg - Les Editions de l'Amateur - 2002Cabinetmakers of the eighteenth century - Earl Francis Salverte - editions of Art and History - 1934Migeon - André Boutemy - Connaissance des Arts, No. 83, January 1959, p. 66-73Migeon the great designers or skilled craftsmen? - Jean-Luc de Rudder - The Mark, No. 11, June 1970, p. 32-38Group Pierre Migeon - Guillaume Janneau - Furniture and Decorations, No. 783, October 1963, p. 92-99