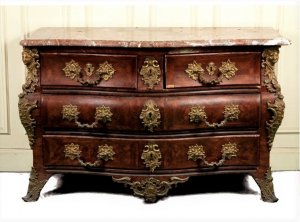 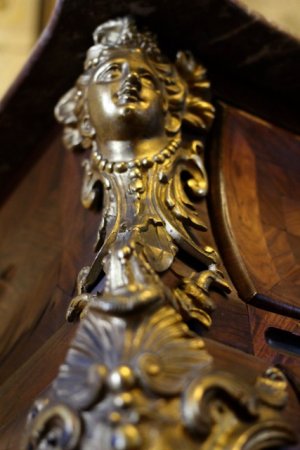 Son of François Painsun, Louis Simon Painsun is the husband of Marguerite Doirat, daughter of the cabinetmaker Etienne Doirat. Master cabinet maker and later Bourgeois of Paris, He resided at Rue Saint-Nicolas in 1727. He is related to Bernard van Risen Burgh's father. His early works ( circa1700 ) are almost unknown. He delivered many of his furniture pieces to the merchant Pierre Migeon. There is evidence of a few pieces with the double stamp Painsun, L.S.P and Migeon. Painsun almost exclusively specialised in commodes during the Regence period ( 1715-1730 ). His workshop at Rue  Saint-Honoré, where he sold his works but also those of his stepfather.
ETIENNE DOIRAT (1675-1732)Etienne Doirat (1675-1732). Became a maître-èbèniste in Paris c. 1700. He is recorded in the Grand-Rue du Faubourg Saint-Antoine at the time of his marriage in 1704  which he managed himself. In 1726 he set up his workshop in the Cour de la Contrescarpe des Fossées de la Bastille, and in 1731 leased a store in the fashionable rue Saint-Honoré, one of Paris' foremost addresses for luxury retailers,  which he placed under the direction of his son-in-law Louis-Simon Painsun (1700 - 1748), who used the mark L.S.P.  Doirat's period of activity coincided with the evolution of the Louis XV style, and most of his works are a combination of this and other earlier styles. Although some of his furniture derives its form from furniture by Andrè Charles Boulle, in general it reflects the influence of Gilles-Marie Oppendord, A. Vassè (1681-1736) and Nicolas Pineau. In particular, Pineau's influence can be seen in the composition of the central cartouche on some commodes (e.g. of 1725-30; Malibu, CA, Getty Mus.) or the indentation used in place of the apron (ex-Lady Dudley col. London). Doirat was one of the first cabinetmakers to divide the commode (e.g. Fulda, Schloss Fasanerie) into three rows of drawers of unequal size, with the first reduced to a frieze and fitted side doors. Interestingly, Doirat is the only important ébéniste of the Regence period, who stamped a good number of pieces he produced. This allows a firm basis for attribution of his production. It is further known that Doirat retained exclusive use of his models for gilt-bronze mounts.

The inventory following his death in 1732, published by J.-D. Augarde, 'IE. Doirat, Menuisier en ébène', The J. Paul Getty Museum Journal, Vol. XIII, 1985, pp. 33-52, reveals the diversity of his production, including not only commodes but also bureaux plats, bookcases, night-tables and encoignures. That inventory further mentions:
'100 livres pesant de modèles de plomb imparfaits servant aux garnitures tant pour commodes que pour autres ouvrages'.
France took the reins of high furniture making during the 18th century, setting precedence throughout the world in both style and craftsmanship. In terms of its construction and design, this commode features all of the characteristics of the great Régence furniture of the era, from the smooth curvature of its shape to the nature-inspired Rocaille decoration of its doré bronze fixtures. Crafted by a master, the commode is accentuated by its fine Royale Rouge marble top, which serves as the perfect complement to the trademark reddish color of the violet wood.