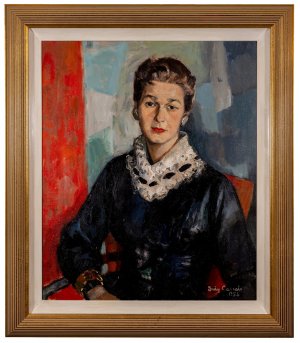 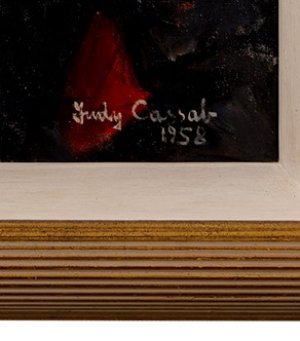 ‘Portrait of a Woman in Black’ oil on canvas dated 1958 by Judy Cassab
Judy Cassab was born in 1920, in Vienna, arriving in Australia in 1951. She studied in Prague in 1939 and at the Budapest Academy between 1945 and 1949. Already accomplished as a painter, she held the first of many exhibitions at the Macquarie Galleries in 1953. Expressionist influences give distinction to her portraits, which include likenesses of many distinguished Australian artists, writers, musicians and actors, such as Joan Sutherland and Robert Helpmann. She held numerous solo exhibitions between 1953 and 1992, including at Rudy Komon, the New Art Centre, London and the Australian Embassy, Paris and she won the Archibald Prize for portraiture twice.
Her work is represented in the collections of all the State Galleries as well as the National Gallery of Australia, Parliament House Canberra, the National Portrait Gallery, London as well as numerous regional galleries and other public and private collections.
Biblio: McCulloch: Encyclopedia of Australian Art; Bénézit: Dictionary of Painters.