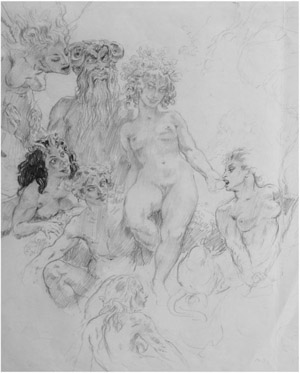 Norman Lindsay Pencil on paper 60.5 cm x 48.5 cm This is a study for a painting held by the Norman Lindsay Museum. Bloomfield describes the painting as: "A fanciful portrayal of some of the higher gods in Greek mythology on the summit of Mt Olympus, home of the gods. A Harpie (half woman half bird) hovers over the majestic figure of Zeus, King of gods and men..... Zeus was the consort of several goddesses but Hera, queen of the gods and goddess of Marriage and women, was acknowledged as his wife and is shown next to him with Apollo on his left and to the right a Sphinx" Lin Bloomfield- Norman Lindsay Oil Paintings page 154 The work is signed on the lower right with initials.